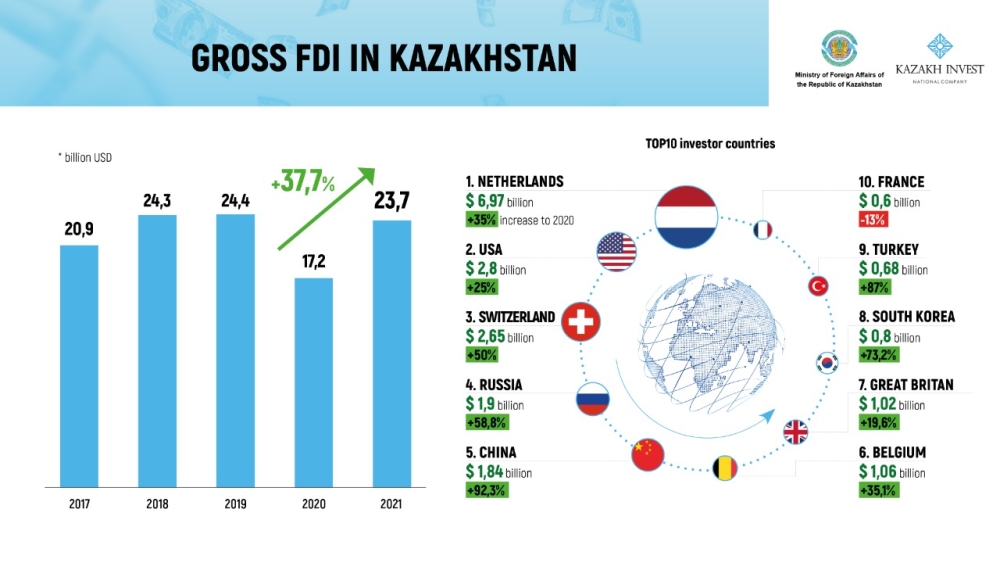 According to the National Bank of Kazakhstan, Kazakhstan managed not only to reverse the downward trend of a foreign direct investment, but also to reach the indicators of 2017-2019. Thus, by end of 2021, gross inflow of foreign сapital inflow in Kazakhstan amounted to $23.7 billion, recording a 37.7% growth to compare with 2020 ($17.2 billion).

By country, the top five countries with the largest amount of investment in Kazakhstan's economy remained unchanged. The Netherlands, USA, Switzerland, Russia, and China confidently hold the lead with the growth of investments ranging from 25% to 92%. These countries account for 68.3% of the total volume of attracted investments.

In turn, the second part of the top-10 countries has undergone significant changes. Belgium displaced the United Kingdom from 6th place, showing significant growth of 35.1%. South Korea with an increase of 73.2% moved from #9 to #8, ahead of French investors, who closed the top 10 largest donors of investment. Turkish investors also ensured the growth of capital investments in the republic by 87% and held the 9th position in the ranking, leaving behind France and Cyprus.

For reference: TOP-10 INVESTING COUNTRIES IN 2021

As for the industries, by the end of 2021, the agriculture, forestry, and fishery sectors showed a 2.8-fold increase in investment inflows, professional, scientific and technical activities showed a 2.6-fold increase, information and communication -80.1% growth, and electricity - 68.3% growth. Investment in the manufacturing industry also showed a significant increase. Last year, investors invested in this sector by $2 billion more than in 2020, recording an increase of 65.4%.

According to the forecasts of the Ministry of Foreign Affairs of the Republic of Kazakhstan, responsible for investment attraction, by the end of 2021, it was planned to attract over $19 billion of FDI.

As a result of the successful implementation of investment projects pipeline and the three-tier system of investment attraction «Embassies of the Republic of Kazakhstan - central states- regional states», Kazakhstan has reached the 2017-2019 indicators.

The Government of the Republic of Kazakhstan is constantly working on improvement of the investment climate by adhering to the best international standards and attaches great importance to the creation of a strong and competitive business environment. In this regard, KAZAKH INVEST acts as a single operator for attracting investments, providing a range of measures to assist investors, in particular in organizing visits to Kazakhstan, identifying funding sources and sites for projects, as well as interacting with local business partners and consulting support in obtaining permits and other documents.

These facts are confirmed by the authoritative international rating agency Standard & Poor's. The agency announced that the sovereign credit rating of the Republic of Kazakhstan at the level of 《BBB-》 with outlook 《 stable 》

At the moment the Concept of the new investment policy of the Republic of Kazakhstan till 2025 is being developed in line with the ESG (Environmental, Social, Governance, and Prosperity) standards.